I’ve noticed that the city of St. Petersburg is attempting a “re-branding” campaign to make it appear more attractive to tourists and investors. A slew of articles in publications like the Huffington Post take you on a virtual tour of the city but make a sharp detour whenever necessary to avoid facing the dire conditions faced by the black population in this city.

After all, a town ripped in half by social and economic inequalities does not make for feel-good advertising.

Painting a pretty picture of the “Burg” to white vacationers begins with the erasure of the poverty, perspectives and aspirations of the black population of this city.

As a white person living in St.Pete, I am sickened by these insidious marketing campaigns devised to obscure the suffering of the oppressed African community simply to drum up cash for white business interests, gentrifiers and tourists.

I have seen at least 6 articles in the past couple of months that present St Pete as this posh, fun-in-the-sun, tipsy-24/7, shimmering saltwater paradise of promiscuity for carefree white people. “Forget Miami, here’s your ‘undiscovered’ little slice of Floridian heaven!”

Behind the facade of a false white paradise, African people in St Pete experience a completely different reality. It’s not the “Florida jackpot” described by the Huffington Post.  No, it is a daily experience of terror, poverty, hunger, imprisonment, police containment and homelessness.

So let’s deal with this question. I don’t want to read another article about the “fine and sugary white” sand of St Pete beach without a word about the constant harassment of young Africans by the St Pete police. I don’t want to read another escapist fantasy designed to distract you from the bodies of Marquell McCullough, Tyron Lewis, Javon Dawson and other young African men gunned down by “St Pete’s finest.”

What about the African community?

When will the Huffington Post publish an article about the 70 percent poverty rate faced by the black community of south St Pete?

Why don’t they mention the fact that the St Pete police run roughshod in the African community, harassing and terrorizing and murdering African people on a regular basis?

Why not mention the reckless police chase policy that has caused entire bus-loads of people to crash into apartment buildings?

Why don’t you mention the fact that the Pinellas school system fails more young black men than any other county in the U.S.?

What about the fact that the US government and business elite use the privately owned Albert Whitted airport to traffic tons of cocaine that generates massive profits for white business interests?

Why not talk about these rich white drug peddlers pulling the levers from their plush office chairs who never see a day behind bars, meanwhile the penny-ante dealers (poor and exploited young Africans with no viable economic development opportunities) are locked up in droves?

Don’t talk to me about the “famous Don Cesar” lording over the beaches of St Pete with its “warm spring colors.” I’d rather talk about the house of the African resident of St Pete whose name was Hydra Lacy. Do you know what happened to his house?

Lacy’s home was demolished when then-mayor Bill Foster ordered a bulldozer to demolish it. The city publicly destroyed evidence left behind by the cops who bombarded, tortured and killed Lacy.

Then there’s Nick Lindsey, an African teenager. A St Pete cop named David Crawford stalked him in the street and Lindsey is alleged to have shot Crawford dead in defense. Now Lindsey is behind bars serving a life sentence. When you remember the police murders of Javon Dawson, Tyron Lewis, Marquell Mccullough, and so many others murdered by St.Pete police, why wouldn’t Lindsey defend himself? And why shouldn’t he?

After Crawford died, the police invaded the black community. I witnessed the full-fledged occupation. I remember the martial law checkpoints the police set up. The cops brandished rifles as they searched cars of Africans in the community, ransacked their homes and pointed assault weapons in children‘s faces. Life is not so “carefree” when you are living under colonial military occupation like the African community of St Petersburg.

Then there are the sports games. The Tampa Bay Rays are a major source of tourism and any coverage glamorizing St Pete is sure to mention the sports culture. If you like sports that’s fine, but the  fact is that Tropicana Field — like this entire system we live under–– was literally built on top of the oppression of African people. Scratch the surface and you will find the blood and misery of African people, EVERYWHERE.

Before the Tropicana Field dome was built, there used to be a prosperous black community in that area called Gas Plant. Numerous black-owned business such as the Citizens Lunch Counter and the Harlem Theatre used to be there. Now they’re gone without a trace. The entire community is gone. In the early 1980s, the city of St Petersburg brought in bulldozers and destroyed every last bit of it, and now the mammoth baseball field monstrosity Tropicana Field rests in its place, generating millions of dollars of revenue for white people.

Chairman Omali Yeshitela, the founder of the Uhuru Movement, was born and raised in Gas Plant. He refers to the Tropicana Field as “the tomb.”

The St Pete economy, like this entire system, is a  bloodsucking economy

This is why the Uhuru Movement says that this economic system is “parasitic.” It sucks the blood, resources, and labor of African people to create a foundation of wealth upon which all white people rest.

I’m a member of the Uhuru Solidarity Movement, the white organization that works under the leadership of the black community-led Uhuru Movement. We know there are other white people who are disgusted by the lies fed to us by this system. Every weekend we go out into our communities and meet other white people like ourselves who want to join us in building a new society shaped by the courageous struggles of Africans and other oppressed peoples for their freedom and social justice. We know that many of you, like us, want to live in a community, a city, and a world of shared prosperity.

Why I’m proud to live in St Pete: the city of African resistance

There are reasons I enjoy living in this city, butit’s not the posh art boutiques, ubiquitous local breweries or Rays games.

The real history of St Pete that makes me proud to be here is the history of the heroic African community who have always been a fiercely militant, resistant and courageous community.

In the 1960s Chairman Omali Yeshitela was the leader of the St Pete chapter of the Student Nonviolent Coordinating Committee. The Chairman was arrested for tearing down an offensive, racist mural from the wall of St Pete City Hall during a political demonstration In ‘66 . For this courageous act, he became a hero of the African working class, and an enemy of the white nationalist city government. He was sentenced to five years in prison.

The mural adorning the walls of City Hall for years depicted caricatures of Africans with unnaturally enlarged cartoonish lips performing in a minstrel-like fashion as entertainment to the on-looking white tourists. It was aperfect reflection of the oppressive relationship between the white tourist population and the oppressed African community. The space on the wall where the mural used to be remains an empty space to this day.

While in prison the Chairman founded the Junta of Militant Organizations, one of the three organizations that later merged to form the African People’s Socialist Party which leads the Uhuru Movement, now an international organization with membership and influence spanning the globe from St Petersburg to Sierra Leone, West Africa. 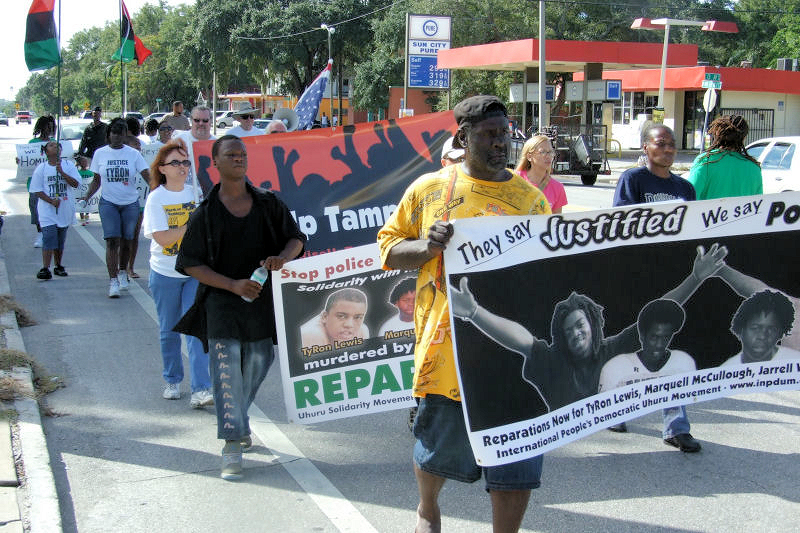 We unite with this demand for African-led economic development and as white people we have to take responsibility for the fact that all white people sit on the pedestal of the oppression of the African community. The Uhuru Solidarity Movement raises resources in the white community and turns those resources over to the liberation and self-determination projects of the Uhuru Movement, as a form of reparations in action.

The money that gets poured into white tourist projects in St Petersburg should be turned over to the African community who are building programs to overturn the horrible conditions that have been imposed on them by this system.

We call for white people to support the African-led institutions in St Petersburg such as the All People’s Tyron Lewis Community Gym which promotes fitness and healthy living and provides a safe, affordable gym for the residents of south St Pete, free from harassment and intimidation.

Organizations of the Uhuru Movement such as the All People’s Education and Defense Fund (APEDF) and the All People’s Development and Empowerment Project (AAPDEP) work around the clock to build programs that address the needs of the African working class.

APEDF’s Uhuru Jiko is commercial kitchen utilized by African bakers, chefs, caterers and small business owners to develop their products in licensed affordable kitchen. Akwaaba Hall is a dynamic and popular space in the Uhuru House (1245 18th Ave S) that is rented by people in the community for dinners, birthday parties, concerts, comedy shows and other community-based events.

A call for white solidarity with the African community

We do outreach tables across the street from the Saturday morning market every weekend, we go on to the college campuses, we do whatever we can to bring the voice of the African working class into the white community so that we can win others to participate in the emergence of a new society where no group lives at the expense of another.

I invite you to listen to the voice of the oppressed. Learn more about what really makes St Petersburg a place worth visting. St Pete is known as the “City of African Resistance.” Come find out why at our upcoming convention.

Make plans to attend the Reparations Now! USM National Convention 2014 -May 3-4  and take a stand in solidarity with the African community. REGISTER HERE!

The world is changing. The struggle of African people for their freedom is changing the world.

The new dawn is rising. Just like the African community inside the US, the peoples of Venezuela, Congo, Cuba, Korea, Afghanistan, Iran, and elsewhere throughout the colonized world are making their voices heard. Africans throughout the world are uniting as one to fight for their liberation.

Our only future is in solidarity with African self-determination.

Let’s build a new culture in our community based around reparations and solidarity with Africans and oppressed peoples – not denial, convenient ignorance, apathy, and opportunism.