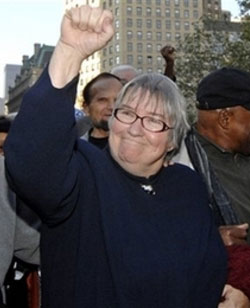 The Uhuru Solidarity Movement calls on all members and supporters to urgently TAKE ACTION in defense of Lynne Stewart, the courageous lawyer imprisoned for defending the resistance of African, Arab and other oppressed peoples as part of the Lynne Stewart Defense Committee’s campaign, “Bring Lynne Stewart Home This Holiday!”

Lynne Stewart must be free! As an attorney, Lynne’s clients have ranged from Africans and other oppressed people caught in the criminal justice system, as well as political defendants such as members of the Black Panther Party, Black Liberation Army, United Freedom Front, Larry Davis, and Muslims being targeted by the US counterinsurgency. In her most famous case, Lynne defended Sheik Omar Abdul Rahman, who is imprisoned in solitary confinement for his alleged involvement in resistance against US domination of the Middle East.

Lynne Stewart was charged with the violation of unconstitutional restrictions known as SAMS in which attorneys were required to agree to not disseminate information pertaining to their clients – whereby, prosecutors could disseminate information to the press about their cases, the defense attorneys were denied the right to use the press to advocate on their client’s behalf. This was designed to promote a highly inflammatory and prejudicial environment toward them. Lynne was charged and prosecuted for violation of SAMS. In 2009, a highly publicized series of legal battles, Lynne was sentenced to 10 years in prison.

Under the 1984 sentencing Act, after a prisoner’s request, the Bureau of Prisons can file a motion for the compassionate release of prisoners for “extraordinary and compelling” circumstances.  Lynne Stewart is suffering from stage 4 breast cancer that was spread all throughout her body. We are sure that her current situation more than meets that requirement.  We therefore call for the immediate release of Lynne Stewart to the loving care of her family, whereby she can receive alternative, integrative healthcare which her family feels will be her best hope. Denying her compassionate release is state-sanctioned murder!

The campaign to free Lynne Stewart calls on all members and supporters of Uhuru Solidarity Movement to call/write the following government’s representatives in reference to Lynne Stewart, #53504-054 Compassionate Release:

Your calls and letters must demand the immediate, Just and Compassionate Release for Lynne Stewart Now. MAKE CALLS!