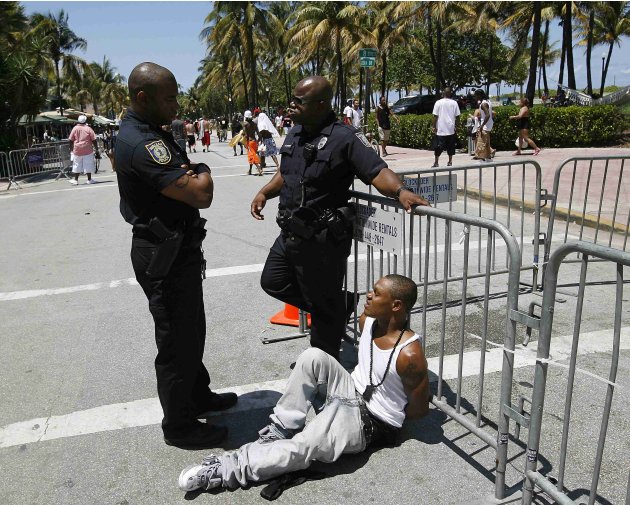 The Uhuru Solidarity Movement, the organization of white people and other allies formed by and working under the leadership of the African People’s Socialist Party, condemns the police terror against Africans in Miami during Urban Beach Weekend on Saturday, May 26th, 2012 that resulted in the murder of one  African and the hospitalization of another.

According to a local Miami news channel,  over 600 cops were present in South Beach this past weekend to keep things “under control” during Urban Beach Weekend where thousands of Africans convene for cultural events.

The stated purpose of the police at the event to keep things “under control” is a euphemism for the brutal public policy of police containment of the African community. The police are organized to terrorize and contain any area highly populated with black people. In the United States the presence of cops in the black community is akin to  military presence in Afghanistan; their presence is one organized by the State to maintain the division between the haves and the have-nots.

In the United States the cops bring violence into the African community, with arrests, beatings, molestation and abuse in the form of ‘stop and frisk’ policies, and murder of Africans by police on a regular basis.

At Urban Beach Weekend the Miami Beach pigs set up a check point, a tactic used in colonized nations such as Occupied Palestine. They say the purpose for the checkpoint is to make sure people are not driving under the influence, but they also implemented scanning every license tag to check for expired tags, suspended licenses, outstanding bench warrants- basically, scanning for any opportunity to arrest an African.  This is an act of warfare against African people.

They set up a “zero tolerance” policy in regards to drinking in public; while it is already against the law, it is not commonly enforced on South Beach where drunken white people are commonplace, but on Urban beach Weekend, with a high concentration of Africans on South Beach and a police arrest quota of 2000. According to reports, over 320 arrests were made.

Around 2PM on Saturday, May 26th, 2012 at the MacArthur Causeway checkpoint, the police shot two Africans, killing one while the other remains in the hospital.

The stories surrounding the incident fluctuate and with severe differences, some that are even borderline hoax-like.  The Miami Herald reported on their website that the face of one of the men was half eaten by a naked attacker. A local news channel did not report information about any sort of cannibalistic act, and said that the man was not actually naked; his clothing was “removed as part of the rescue process”. In reviewing the surveillance video, both men were stripped naked.  Clearly the facts are not straight because the cops do not yet have their fake story straight; the truth of the matter is the cops were carrying out their role to attack Africans. The cops are modern day lynch mobs!

Javier Ortiz, spokesman for the Police, called the cop a “hero” for this shooting. However, it is not noted that this same spokesman calling a cop a “hero” was sending out anti-black imagery to his colleagues last year. At that time Javier Ortiz was vice president of the fraternal order of police, when an image leaked that he sent out to his colleagues of Durral Miller, an African man murdered by the cops, Javier Ortiz photoshopped to have red eyes and “demon-like” teeth.

There has been no resolve or reasonable explanation to last year’s incident. It is clear with the cases of Decarlos Moore and countless others that the Miami PD have no regard for human life when the human in question is an African. Police repeatedly get away with murdering African people, not just here in Miami but all around the US. Such disregard for human life is practiced by the US military and other allies in the wars of Iraq, Afghanistan, Africa, Palestine; as well as places where NATO has “intervened” like Libya.

Economic development for the African community — NOT police containment!

These shootings and large scale arrests are not isolated, but part and parcel of a larger system functioning to protect parasitic capitalism. This  is a system, born from slavery and genocide, that benefits the white ruling class and general white population at the expense of African people. As white people we are supposed to feel “safe” when the cops are terrorizing Africans. We are the ones who benefit in material ways from the colonial occupation of African communities.

Is this something you can tolerate? Are you comfortable living at the expense of people whose communities and lives are being destroyed by police, prisons and other forms of colonial terror? We cannot stand by idly as this continues to happen. We cannot be complacent in this maligned system! We must stand in solidarity when Africans resist. We must overturn our own history of violence and organize in the white community for reparations to African people to right the wrongs of history.

Take a stand against the war on the African community!

Take the pledge of solidarity with African People! On the pledge form you can leave a personal statement that will be read aloud at the convention.