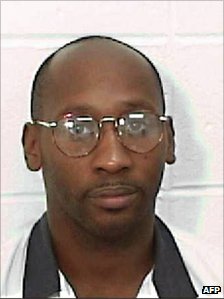 September 20, 2011—U.S. colonial courts of the state of Georgia ruled today that Troy Davis will be murdered in a legal lynching tomorrow, Wednesday, Sept. 21 at 7 pm.

Davis, 42, an African man who has been on death row for more than 20 years, was framed up and convicted in the 1989 death of a white policeman in Savannah, GA.

Despite no physical evidence and the recanting of testimony by seven of the nine witnesses, plans for the execution of Davis, one of the millions of African men trapped in the colonial prison system, are moving forward.

Massive protests from African people and their allies all over the U.S. and the world and more than 60,000 letters have demanded that the state stop the state murder of Davis.

Although Davis is clearly innocent of the charges, the issue is much greater than that. Davis is one more victim of the U.S. colonial system which holds the power of life or death over African people inside this country and around the world!

The planned state murder of Davis highlights the reality that the U.S. is built on a foundation of the enslavement of African people which created the wealth and power that the U.S. and white people enjoy today.

The attack on Troy Davis exposes the fact that 146 years after the so-called abolition of the chattel slave system in this country, African people still exist as an internal colony inside U.S. borders under the yoke of a military occupation no different than the U.S. occupation of Afghanistan today. In fact, more Africans have been killed by U.S. police in the past ten years than U.S. military have been killed in Afghanistan in the same time period.

This attack on African people through the murder of Troy Davis comes at the same time that there are more African men in colonial concentration camps called prisons than were enslaved in 1850 and when the wealth held by the average white person is 20 times greater than the assets of African people.

As the economic and political crisis of imperialism deepens, African and oppressed peoples around the world are rising up against imperialist white power.

Troy Davis belongs to African people. No imperialist court of the U.S. government, built on African oppression and colonial occupation, has any right to lift a finger against an African person. African people are struggling for power over their lives and are part of the worldwide struggle of oppressed peoples to liberate themselves and overturn the 500 year legacy of imperialism and white power.

September 21, the date of the planned execution of Troy Davis is the day of our first Day in Solidarity with African People which will take place in St Petersburg, FL. This is all the more reason to come out to the important event to take your stand with the right of African people to resist this colonial violence and to struggle for justice, reparations and liberation.

If you believe that there will never be peace on the planet without justice, reparations and reconciliation for African people and all the countless victims of imperialism past and present against whom terror, genocide, exploitation were carried out in our name and for our benefit, then Take the Pledge of Solidarity and donate at least $10 to the African-led Uhuru Movement for liberation and self-determination for African people everywhere.
0 Comments
info@uhurusolidarity.org September 20, 2011
Share
Tweet
Pin
Share