STOP THE WAR ON THE BLACK COMMUNITY:

Solidarity with African people, from Libya to St Pete!

Take the Pledge of Solidarity Today! 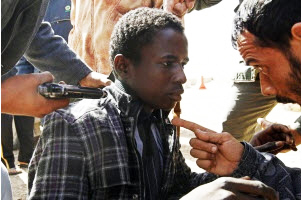 This is the US-style “democracy” that was used to justify US and NATO military invasion and occupation of the sovereign nation of Libya by selecting, propping up, arming and funding so-called rebels. Supported by such liberal groups as Anti-war.com and Amy Goodman of Democracy Now, it should not be surprising that the rebels are murdering black Africans on sight. The “rebels” in Libya are the the minions of US imperialism, a system built on the mass enslavement of African people. This is why we need A Day in Solidarity with African People–reparations, self-determination and justice for African people everywhere. Take the Pledge of Solidarity with African People today!

At a time when white families have 20 times the wealth of black families in the US, and in the city of St Pete over 70 percent of Africans live at or below the poverty line, the St Pete Police Department is requesting 250,000 dollars for an armored vehicle to occupy and terrorize the African community of south St Pete just like they did earlier this year after the alleged shooting of a police by 16 year old African, Nicholas Lindsey. The Uhuru Solidarity Movement denounces this use of funds for the increased militarization of the St Pete police! We unite with the Uhuru Movement’s demand for economic development for the African community, NOT police containment! Support the campaign for “A Day in Solidarity with African People” — reparations, self-determination, and justice for African people everywhere! Stop the war on the African community! Take the Pledge of Solidarity with African People TODAY!